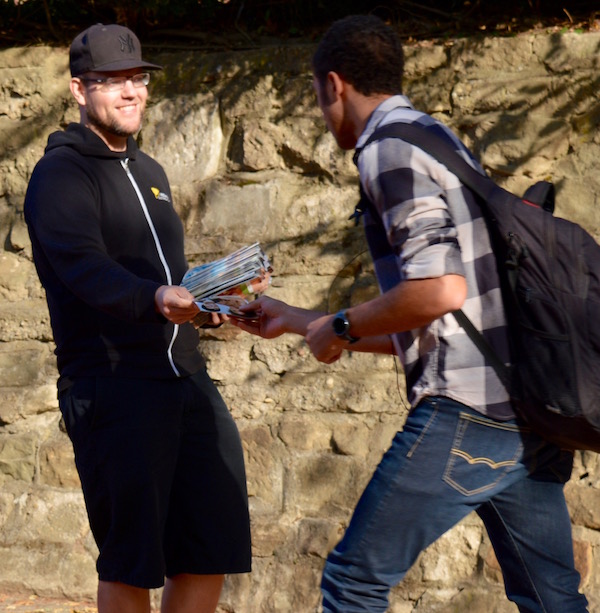 To summarize the state of the project, we are in the midst of our third pilot test to determine how best to go about measuring direct diet change created by leafleting and we are optimistic that we’ve found a method that can provide a reasonable amount of statistical certainty. The drawback is that it comes with a price tag of about $40,000. For this reason, we are likely to conduct it in waves over the course of a few semesters.

Excerpts from the Full Article

People have always asked us at Vegan Outreach how we know whether leafleting makes a difference.

We have mainly had anecdotal evidence to provide them, such as the Lives Changed and Recent Feedback pages on our website, which list some of the feedback we receive from people who have changed their diets due to receiving a booklet.

The impact that can be palpably felt on college campuses when leafleting—by talking to interested students, seeing people reading the booklets, and overhearing people discuss the issue—typically leaves an activist with a strong sense that they have just done a lot of good. These feelings are what keep so many leafleters going out day after day.

Nonetheless, it would be great to have more precise information about the impact of leafleting. This is no easy task, since there are at least four scenarios where leafleting is likely to make a positive difference.

Historically, studies on leafleting have focused on the first scenario (direct diet change). Vegan Outreach’s current efforts are also focused on determining how likely people are to change their diet after receiving a booklet. However, to get a full understanding of the benefits of leafleting, these other dimensions have to be taken into consideration, and may themselves be subjects for future investigations.

A 2016 Harris Poll commissioned by the VRG found that “Approximately 3.7 million U.S. adults are vegan; 4.3 million are vegetarian but not vegan.”

To my knowledge, these polls are the best information we have on how many U.S. adults are vegan, and they show that over 22 years—and a great deal of activism—we have increased the number of vegans by about 3 million.