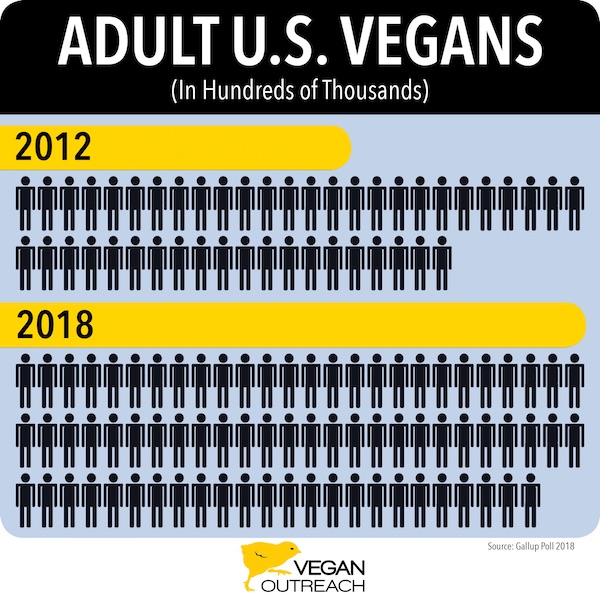 On August 1, Gallup released a poll in which they asked people whether they were vegetarian and vegan, and then compared the results to the same poll they conducted in 2012 (1). Gallup framed their results as, “Few Americans Vegetarian or Vegan,” but that really depends on your perspective—applying their results to the adult population shows that 7.6 million U.S. adults consider themselves to be vegan and that’s a considerable increase from earlier decades.

Gallup found that while the percentage of vegetarians has remained at 5% since 2012, the percentage of vegans had increased from 2% to 3%—a 50% increase in six years. And if you do the math based on the U.S. adult population from 2011 and 2017—the years they used in their calculations (2)—the number of vegans has increased by an estimated 2.8 million in those six years.

There are two caveats to this poll:

That said, the trends point in the right direction and reinforce our experience on the ground—the number of vegans is growing. Thank you to everyone working to spread a vegan lifestyle and end the suffering of farmed animals!

3. How many adults in the U.S. are vegetarian and vegan? Vegetarian Resource Group. Accessed August 10, 2018.