Vegan Outreach recently joined with ReadingRewards to do a pilot study to determine the effectiveness of paying people to read our booklets. Participants were given a small reward as part of a rewards program. 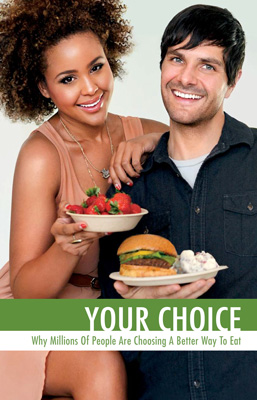 We tested the booklets Your Choice (YC), Even If You Like Meat (EI), and a control pamphlet about immigration. Participants were then surveyed to see if they intended to change their diet. All participants were surveyed a month later to see how they changed.

You can see the basline report by clicking here and the follow-up by clicking here. As of this writing, I didn’t have an official study design report yet, but will add that as soon as I receive it. [Added Dec 18, 2014; click here.]

The takeaway messages were as follows. 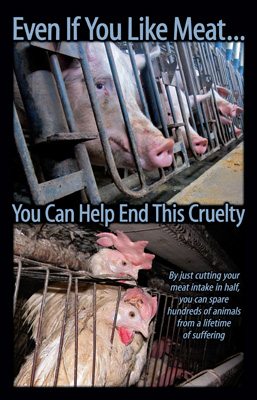 EI was the stronger pamphlet in terms of getting people to change. Compared to YC, EI has more text, citations, and more graphic images. It doesn’t focus as much on trying to convince people based on the fact that others are also going veg.

The finding that people were more persuaded by EI goes somewhat against the social research that suggests that seeing other people like you doing something is the most powerful motivator for change. On the other hand, older people were more likely to change in this survey (which was a surprise), and YC shows pictures of college students, not older people.

Predictably, women were more likely to change than men as 6.8% of female respondents who read a VO pamphlet reported changing their diet due to reading the pamphlet, compared to only 1.4% of male readers.

In terms of how much change the pamphlets created, the results suggested that 1 out of every 60-100 readers may have become pescetarian, vegetarian, or vegan due to reading the pamphlet. These results are highly uncertain due to lack of statistical significance. If true, then at a cost of $0.44 per read, it would be $26.50-$44.15 per major diet change.

Some of these results were surprising. We had been planning to make all our booklets more like YC, but this has given us a strong reason to continue having a couple booklets with more graphic photos and more text and citations.

The fact that older women were more likely to change their diet than younger women or men was also surprising. It’s hard to believe that this finding isn’t an anomaly, but definitely worth paying attention to more for the future.

In the meantime, I don’t think this survey should necessarily be taken as the final word on which booklet to use. The fact is, for most leafleters, YC is a lot easier to hand out and possibly handing out more could overcome the fact that if someone reads the entire booklet, they are more likely to change from an EI. And we don’t really know the differences between the booklets among a large number of college students.

The benefits of this Pay Per Read model for studying our booklets is that it solves some of the significant logistical problems of going onto college campuses and surveying people over time (especially finding the people to re-survey over time). In the not-too-distant future, I am interested in testing:

That should keep us busy for a while.