In this article, Alison Lenton, PhD, discusses the process of making a significant behavior change. Although changing any habitual behavior is difficult, understanding the process better can enable us to put ‘setbacks’ and ‘stagnation’ into context and see them for what they are: not failures, but an integral part of making any significant change.

Faunalytics’ 2014 Study of Current and Former Vegetarians and Vegans asked a mostly-representative U.S. sample of people age 16+ to report on their current and former eating habits and their attitudes toward meat and dairy consumption. Of the nearly 11,400 people who participated, approximately 12% were either former or current vegetarians or vegans. For the purposes of this blog, some of the study’s key findings were:

Given these results, it would appear that it is fairly difficult to transition from being omnivorous to veg•n, but any big change in habitual behavior can be difficult. Let’s look at why that is.

Successful adoption of a new habit depends on the following (for a more complete summary, see this document from Faunalytics):

Add to this that the new and old habits then compete with one another for dominance. That is, for an old behavior to be replaced by a new behavior, the right internal (intra-person) and external (environmental) circumstances have to be in place. To illustrate, consider the following recent model of behavior change (Kwasnicka, Dombrowski, White, & Sniehotta, 2016): 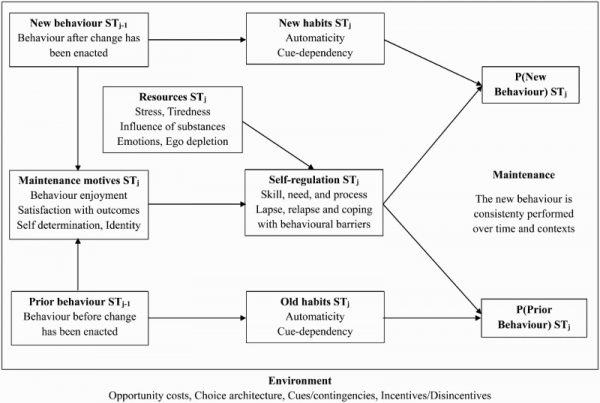 According to this model, even after an initial change in behavior, the old and new ‘habits’ remain in conflict with one another. This is because the probability of one or the other habit dominating at a given point in time and in a particular situation depends on competition between the two habits’ different motivations, the distinct emotional resources required to enact or suppress them, the particular levels of self-control they demand, and just how automatic the associated behavior is (or has become). As the model points out, the new behavior may ultimately win out if it is practiced again and again, across different situations and over time.

As a result, when one initiates a change in behavior, it is not uncommon to find that the old behavior continues to pop up now and again, at least until the new behavior becomes automatic; as illustrated by the figure below (also from Kwasnicka, Dombrowski, White, & Sniehotta, 2016).

And even then, it isn’t as if the old behavior and all of its triggers are completely erased. Think of it like how computers write files onto the hard drive: Writing a new file does not necessarily overwrite the old one. Remnants of the old file continue to persist and can be brought back into competition with the new file given the right (or, perhaps, wrong) circumstances. So even with everything in place, there will be setbacks: It takes time for a new habit to dominate the old one.

The fact that so many former veg•ns ‘failed’ but tried again—and want to try yet again—may actually be part of the process of becoming veg•n. Indeed, the 2014 Faunalytics Study found that the ‘failed’ veg•ns were more likely to indicate that they transitioned to their new diet over a matter of days/weeks, whereas for the ‘successful’ veg•ns, it was reported to be a lengthier process. In other words, it may be that the ‘failed’ veg•ns in Faunalytics’ study are simply at an earlier stage in their path to veg•nism, and many will still ‘get there’ in the end.

The findings also hint that any attempt at becoming veg•n may be successful to some extent: Those who ‘failed’ the strict test of maintaining veg•nism still reported eating less beef and pork thereafter than those who never tried to be veg•n (though we note that these data are correlational and, thus, causal conclusions are tenuous).

With that in mind, we recommend that animal rights and welfare organizations focus on informing people that becoming veg•n is a process made up of a series of smaller, achievable steps. This is because goals that are perceived to be feasible are more likely to be set in the first place than are goals deemed too daunting. These organizations should also give people explicit advice as to how to take those initial steps (e.g., simple rules-of-thumb such as “always choose the tofu option” and “when offered cheese, say ‘hold it please!’”), as research indicates that those with concrete if-then plans—especially plans that include strategies for managing potential obstacles—are more likely to achieve their goals.

At the same time, advocates should continue to advance the general message that these small steps lead somewhere: Veg•nism reduces animal suffering and death, not to mention that it improves human health and the welfare of our planet. To the extent that we can make the process of becoming veg•n seem more manageable to people, and get people to understand that it is indeed a process that includes stagnation and setbacks, then we expect that more people will set upon and, ultimately, stay on the path toward veg•nism.

This blog is a variation and extension of one Dr. Lenton wrote previously for Faunalytics.

3 thoughts on “The Rocky Road to Behavior Change: From Omnivore to Veg•n”