Monthly donor Steven Rouk volunteers his time for various projects to help people go and stay vegan. I hope I don’t sound too mushy, but he really is one of the most inspiring people I know. At 25 years of age, he has already done so much that’s worthwhile and world-changing–including supporting the work of Vegan Outreach! I’m thrilled to introduce Steven Rouk!

Tell us about yourself, Steven.

I try to do all of the things, which inevitably leads to disaster, and sometimes greatness. My life has always been a tug-of-war between the math / data / analytical side of me and the music / writing / emotive side of me. So some months, I’ll be spending 16 hours a day at my computer learning web development and analyzing data (recently, I’ve been working on creating an interactive map of factory farms in Colorado, as well as having recently founded the Boulder Data Science Meetup group). Other months I’m writing new songs on my guitar every night or trying to finish another novel (I’m currently publishing a novel to Instagram, one page per day, and also about to release a new song and music video). “Balance” probably isn’t the right word for my life, but if balance were to drink as much coffee as I do then it’d probably be somewhere close to me–caffeinated and over-ambitious.

I’m also really, really interested in the beautiful and vague notion of “impact”, especially related to animal rights and bettering our human societies in the most important ways. Reducing suffering and promoting well-being is what it all comes down to, really. At some point I’d like to start a company (or five) around these concepts. It’s on my bucket list – as soon as I finish recording my next album and get back from tour. (Joking! Sort of.)

How did you get involved in the world of animal protection? How about with Vegan Outreach?

It was a long, slow journey to veganism for me, with each step along the way prompted by a video or documentary. In the beginning, it was all PETA videos of factory farming. I’ve always treated food as a tasty thing to keep me fueled for the next adventure, so it took a while to fully break me of my deeply ingrained habits and completely live according to these new values I was forming. (I grew up in the South, so going vegan was essentially shunning half of the food groups I had known.) But, the magnitude of the issue implanted itself very firmly inside of me because of the sheer amount of suffering involved.

I eventually learned more about the environmental, health, and human rights aspects as well. The beautiful thing about the truth is that it’s a stubborn thing, fighting through any barriers if given enough time.

What drew you to Vegan Outreach’s approach, and what inspired you to support it financially?

I think leafleting is awesome and wonderfully effective. Imagine if every college student on every campus in the United States (nay! the whole world!) knew about the immense and completely unjust suffering of animals, and they all knew about the terrible thing that factory farming is. Wouldn’t that be awesome? Wouldn’t that create a massive influence strong enough to shift the current paradigm, with a whole generation empowered by the truth? Absolutely, and that’s exactly the vision VO is working towards.

We’re going to reach that day, and we’re going to reach it sooner than we all think. The question is, how will we have helped it get there? There are many ways that I’m trying to help advance the cause, but a no-brainer way is to throw some money to VO and other organizations that have such a huge impact. We all have individual battles to fight when it comes to this, but we absolutely must also support those who are helping pave the way in larger ways than we can do as individuals.

What barriers do you see that may keep young people from donating to support their favorite non-profits? What would you say to young people to encourage them to donate?

“Donation” is a dirty word to a lot of people, and truthfully I probably have a negative connotation with fundraising and donations as well. I hate asking people for money, and I don’t particularly like being asked either. So there’s a paradox, exemplified by this fictitious conversation – “That’s so awesome what you’re doing! Oh, you need money to continue…? Like… my money? Can’t you sell t-shirts on Amazon or something?”

We live in such a capitalist, pull-yourself-up-by-your-bootstraps society that we think you have to sell something to be worth something. The thing is… you don’t. We give stupid amounts of money to profit-hungry companies all the time, buying random crap that we don’t need and probably don’t even want. Why? Because that’s how our economy is structured, and marketers have gotten really good at selling us pants and gadgets and thingamabobs, regardless of whether we need them or not. It’s a vicious self-reinforcing cycle.

We all need to challenge ourselves to see through that, to see through the impulse to buy random stuff we don’t need, and to instead support people who are actually doing important work but who aren’t supported financially by our current system. Or you can buy random crap and donate to important causes, that’s totally fine too.

I’m a fickle human with a very limited attention span and memory, so I make it easy on myself – all my donations are set up on a recurring monthly basis, so I never even have to think about it. It’s easier than buying my daily coffee, and way more rewarding. (Though, coffee is pretty great.) Every time I see that donation go out, I know I’m helping people do some of the most important work in the world. I’m helping to bring on the revolution, the next iteration of humanity, one totally unmissed donation at a time. And that’s so awesome. (VO didn’t pay me to write this, I promise – it’s really just that important and amazing to support the things you care about.)

What is your favorite vegan meal?

Honestly, I’m a bit of a utilitarian when it comes to food. Left to my own devices, I will eat pretty much the same thing for every meal: a baked potato (with a little bit of olive oil and herbs), slathered in beans, and covered in salsa. Or I guess I also make this thing I affectionately call an “Epic Salad” (trademark – just kidding), which is a huge pile of spinach, covered in the largest variety of fresh produce I can muster up – tomatoes, peppers, mushrooms, carrots, obscene amounts of avocado, onion, etc. – and then drenched in a homemade olive oil vinaigrette with all kinds of herbs. I’m all about an easy, consistent routine so I can focus on my projects. If it weren’t for my girlfriend, I’d probably be downing Soylent three times a day by now.

And since he mentioned it, here’s where you can donate monthly to Vegan Outreach. 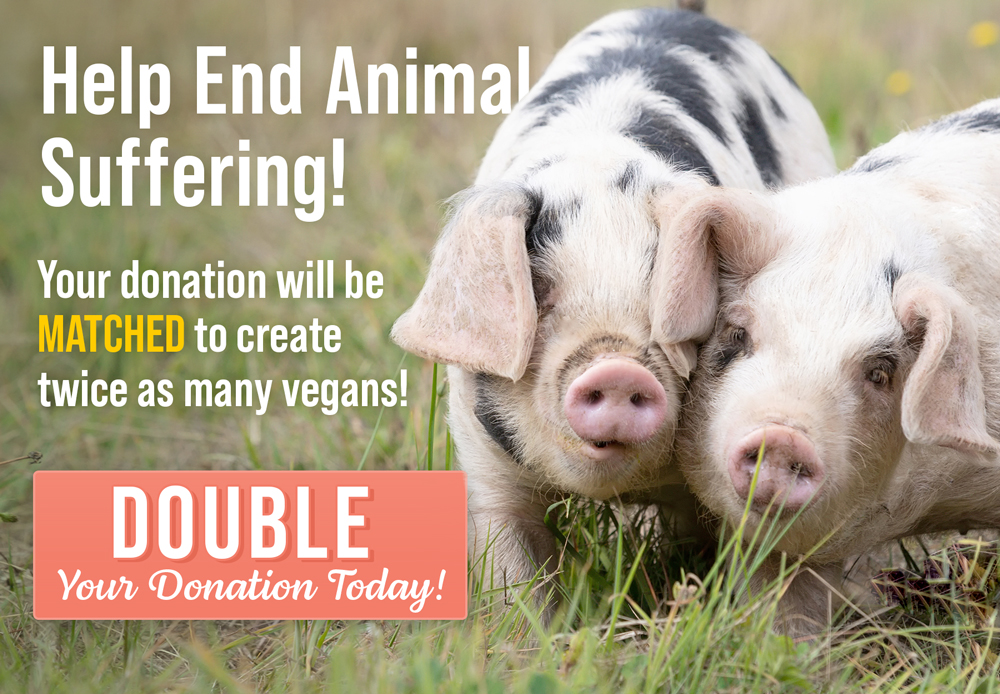